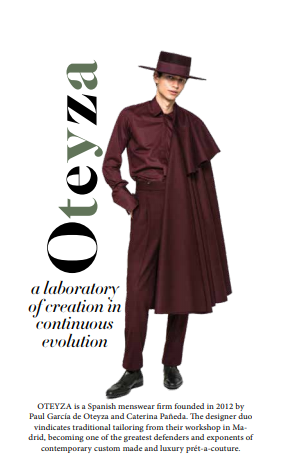 Recently, the firm has been awarded the 2018 National Fashion Award in the category of Innovative Entre preneurship, as well as the 2018 T Magazine’s Award (The New York Times magazine) for Best Male Collection. The following year, they were VOGUE’s Who’s On Next 2019 finalists. In addition, this same year they have been named “Madrid Ambassadors” by the city council to represent our city internationally. OTEYZA is a laboratory of creation in continuous evolution. Its activity is based on three lines: season-by-season design of ready-to-couture collections, bespoke and made to measure tailoring. However, the most recognized milestone of the brand is to focuse on recovering the legacy of historical Spanish garments and textiles, such as the Spanish cape and the Spanish merino wool, finding the harmony between volumes and functionality trough reinterpreted patterns. OTEYZA was selected to open PITTI UOMO fair on 2016 – the most important mens fashion fair worldwide when presenting their first capes collection. The first reinterpretation of the Spanish cape created by OTEYZA was based on a simplification exercise in which the seams were eliminated and the cloth was cut in blood in order to offer the maximum movement to the garment as well as the greatest visual lightness. For this, the cloth was also worked, compacted,
so that it did not suffer when cut in blood gaining lightness without losing its qualities. Arousing from this first cape, the
house creations have been responding to an engine of fluidity and authenticity, with lines that open an close volumes and spaces, creating a constant dialogue in continuous evolution. The collections are now formed by asymmetric trench coats, coats with different collar overlays, jackets with intense pleats, flowing sail pants or
cape skirts, marking masculinity in 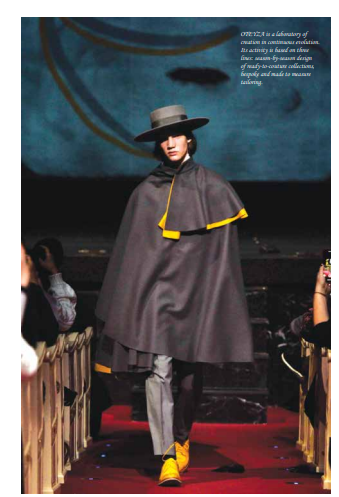 a palette derived from intense colors
found in nature, such as olive greens,
mustards, browns, fluorine oranges, electric blues and , of course, the black OTEYZA, always present in the house. Such collections have been presented national and internationally at Pitti Uomo, Madrid Fashion Week and currently at the Paris Fashion. On the other hand, the firm has collaborated with the Spanish National
Ballet in the presentation of ‘Raíces’
SS19; with the “Fundación Maphre”
in the exhibition ‘Zuloaga in Paris de la Belle Époque, 1889-1914’; with the “Teatro Real” in its costume design. ; with Thyssen Museum for their Balenciaga Exhibition; or with the “Museo del Traje” (Spanish Cos
-tume Museum) and “Teatro Español”,
among other cultural institutions. 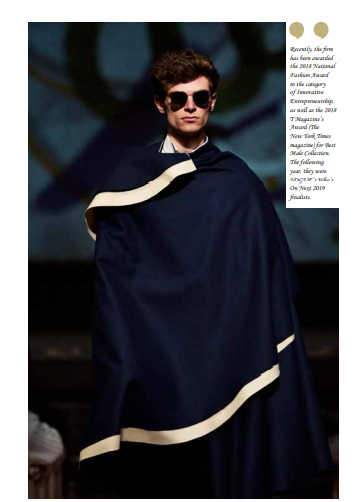